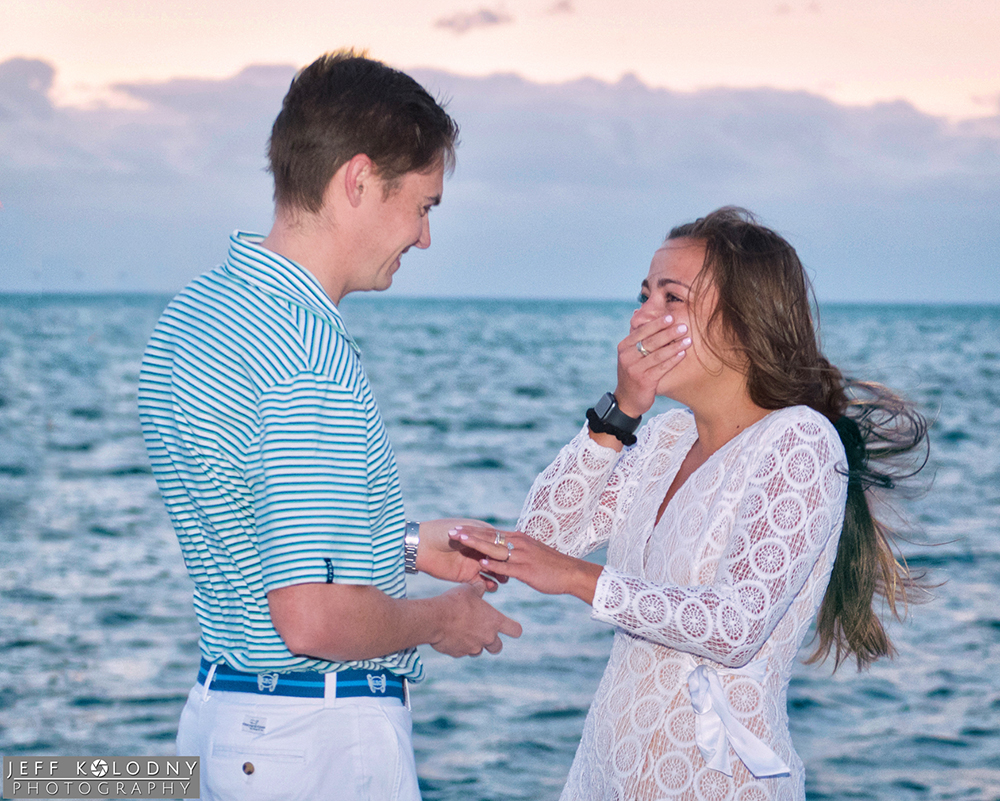 If you are dreaming of a sunrise marriage proposal in the Florida Keys than this article is a must read.

Recently, I had the pleasure of photographing a sunrise marriage proposal  at one of my favorite locations in the Florida Keys: The Ocean Reef Club.  As a South Florida-based wedding and event photographer, I have worked at nearly every luxury wedding venue in the area. Some venues offer breathtaking views of the Atlantic Ocean and the crystal blue Caribbean. There is no shortage of picturesque locales in South Florida and the Florida Keys.

However, amid all these fantastic options there is one exclusive location that captures the hearts and souls of all who visit. Whenever I work at the Ocean Reef Club in Key Largo, I am always overwhelmed by the love that both residents and visitors have for this wonderland.

The Ocean Reef Club is located on a peninsula, surrounded by beautiful waterfront views on three sides. Simply driving into the resort from Miami is a memorable experience. The route offers views of the ocean and surrounding inlets. Of course, driving is not the only way to get to the Club—you can arrive by boat, or fly into the resort’s private airport via Gulfstream or Lear jet.  Check out this cool video shot while flying into the Ocean Reef Club.

A Marriage Proposal At the Ocean Reef Club

Over the past few weeks, I have received more calls to photograph marriage proposals than in my past fifteen years in the field. I believe it is the result of the pandemic drawing near its end. Couples feel more confident about holding future events and are starting to make decisions. As a South Florida wedding photographer, I am starting to photograph events that have been put on hold for more than a year. When Charlie reached out to me asking if I could photograph his a sunrise marriage proposal at the Ocean Reef Club, my obvious answer was yes.

For those not familiar with the Ocean Reef Club, the property features a special location known as “The Point”. Sporting views of the peninsula, The Point is a place where residents and visitors alike hold weddings, vow renewals, and many other celebrations. Tori thought she was simply visiting The Point to watch the sunrise. Little did she know of her boyfriend Charlie’s true plans.

Charlie and Tori’s romance bloomed at work, where they were introduced by a mutual friend. Not wanting to mix work and romance, they kept their relationship a secret. As time passed, it became more difficult to keep their romance hidden from coworkers, and after six months they decided to announce the relationship to their workmates.

Charlie and his family are Ocean Reef Club regulars and have been vacationing at the Club since 2001. If you understand how Club members feel about their Key Largo paradise, it only makes sense that Charlie and his family would invite Tori to the resort, as well. Tori’s inaugural visit to the Ocean Reef Club was to attend a sunrise service during Easter of 2019. Naturally, she fell in love with the place. Spending Easter at the Club became a yearly event for Charlie and Tori.

On this particular Easter morning, Tori expected to attend another sunrise service, as was their tradition. Charlie planned to arrive early so that fewer people would be around when he proposed. As you can see from the pictures, Tori was not expecting the proposal.

During our photo session, Charlie told me that the pair had spent four months quarantined together at the Ocean Reef Club, during the pandemic. After four months of seclusion at Key Largo’s exclusive private paradise, Charlie knew it was the only place to pop the big question. Since he wanted their sunrise marriage proposal date and location to be special, he settled on the sunrise of Easter morning.

“I wanted the date and place to mean something to both of us,” said Charlie. “Not just on that Easter Sunday, but every Easter we spend together at ORC in the future.”

Since a proposal day will be a day to remember, make sure to choose a special place and date. As a photographer, I can tell you that many photo sessions take place at meaningful locations. I’ve photographed hundreds of anniversary sessions, family photos and engagements in restaurants where the groom proposed, or where a couple had their very first date.

Charlie says: “Make sure she wears an outfit she wants to be photographed in.” Tori knew she would be attending a special event, so she wore an outfit she loved and had her nails done. As a photographer, I’ve photo-shopped new nail polish onto more than a few sets of nails.

When Charlie hired me to be the official photographer, he outlined every detail of his plan. If you are not familiar with South Florida and the Keys: it rains here. A lot. Sometimes you simply can’t predict the weather. Charlie was careful to consult with me, in the event that a rainstorm was forecast. In the days before Easter Sunday, the forecast was indeed a bit questionable. On Easter morning, however, there were cloudy skies but no rain. It worked out perfectly: the clouds provided beautiful detailing to the colorful sunrise.

Keeping The Proposal A Secret

In the case of any marriage proposal photo shoot, it’s very important to keep the event a secret. As the photographer, I contact the future groom using only the method with which he contacted me. That means if he sent an email, I will only reply by email. If his email is connected to a phone number, I don’t send a text or call unless he says I should do so. I also try to keep the nature of the conservation as vague as possible. It’s all too easy for the secret to get out.

A previous client had invited his family to attend the cocktail hour after the proposal had taken place. This particular proposal was held at one of South Florida’s upscale hotels. The plan was for the couple to arrive at the hotel and have a few drinks before dinner. Afterwards, they would walk to a special spot, where he would propose. When they entered the hotel, the girlfriend spotted her grandfather sitting in the lobby, having a cocktail. That blew it. She instantly wondered: ‘Why would my grandfather be having a cocktail in this hotel?’ She knew what was happening, but played along. However, she stated after the fact that she wished she hadn’t have seen him. So, if you are planning a proposal, consider having family hide or arrive later on in the day.

Charlie was right to make special arrangements for processing the pictures on the same day. I am based in Boynton Beach Florida, so the trip from Key Largo to Boynton Beach is around two hours. After arriving home, I immediately edited and enhanced the pictures. Charlie and Tori were able to share their special moment online later that same afternoon.