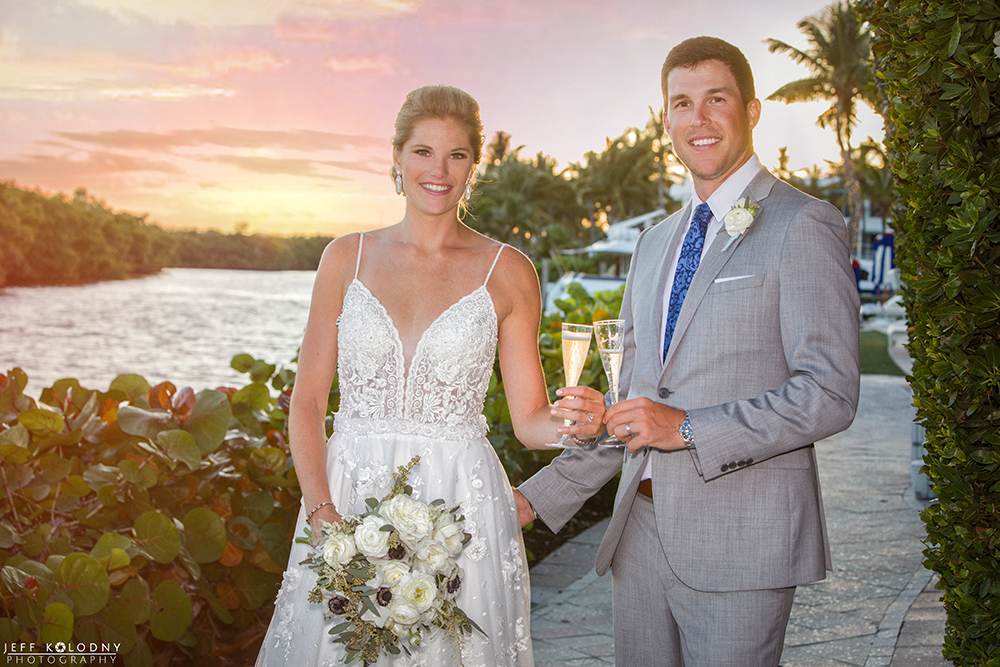 Taylor and Robert had an amazing Ocean Reef Club wedding.  After their ceremony on “The Point”, the guest were treated to a night of great music, awesome food and a wild party!

Taylor and Robert had the ultimate Ocean Reef Club wedding and I must say I’m thrilled that I had the opportunity to photograph this amazing Florida Keys wedding.   If you are not familiar with the Ocean Reef Club, let me introduce you to this somewhat secluded luxury location.  If you are recently engaged and looking for a place to tie the knot then this could be your dream wedding venue.

The Ocean Reef Club is located in a secluded part of Key Largo.  It’s approximately four miles long and includes a wonderful golf course, a marina, tennis, several restaurants that range from casual to fine dining options.  Members and their guests can hang out at The Club for days, there is really no reason to leave, unless you would like to take a boat to one of the Florida Keys fine restaurants on the water.   In addition to golf, tennis, and fine dining, the Ocean Reef Club has almost unlimited water activities.  Love SCUBA diving or snorkeling?  Check out The Dive Shop at Ocean Reef, (Link)   Fishing, sure there is fishing. (Link)  There is also Buccaneer Island with its lovely beach.    The Travelers to the Ocean Reef Club can arrive several different ways.  First you could drive, getting to the Ocean Reef Club is easy, If you are coming from Miami you can US 1 to Card Sound Road straight to County Road then turn left which will take you to the Ocean Reef Club’s front gate.  Or if you are in Key Largo just take County Road North to the club.  Of course I you are in a rush to arrive and don’t want to waste time driving, you could always fly into their private airport.   Landing at the Ocean Reef Club

Taylor and Robert had known each other for a long time.  They met before Taylor started college and dated through their college years.  Several years after they finished college, Robert surprised Taylor with a ring and marriage proposal in Medina, Ohio over Christmas vacation.  Taylor who was visiting her family, was told that she had to attend a family gathering for the purpose of having a family photo taken.  While she was alone waiting for the other family members to arrive, Robert appeared and proposed under the gazebo.  First she was surprised that Robert arrived, then even more thrilled when he proposed.

The day before the wedding, Taylor and Robert held their wedding rehearsal at the Chapel at Ocean Reef.   The chapel is located on the Ocean Reef Club property, is a beautiful house of worship that is located on a small rolling hill in the center of town.  I have photographed several weddings inside the Chapel on the Reef and it’s very pretty inside.  After the rehearsal, while everyone was still inside the chapel, Taylor and Robert’s parents were treated to an unexpected surprise Catholic ceremony.  After the ceremony all the guests were treated to a festive welcome dinner on the beach.

On the wedding day morning, Robert and Taylor got ready in separate locations, Taylor and her girls got ready in one of the condos in the Ocean Reef Club’s hotel.  Robert and his guys got ready at his house located a short drive away.   While both were getting ready for their big day, they separately exchanged gifts.  Taylor couldn’t hide her emotions when she opened a card that included an ownership title making her shared owner of Nox.   Opening that card was the first time Taylor cried tears of joy on her wedding day.  By the way, if you are wondering what breed of dog Nox is, he’s a Brittany.

In addition to wonderful cards and other meaningful tidbits, Taylor and Robert also exchanged very nice Rolex watches as well.

The most popular place for Ocean Reef Club wedding ceremonies is at a spot called “The Point.”   The Point is a small isthmus that jets out into Atlantic Ocean providing amazing ocean views on three sides.  I have photographed a lot of weddings in the Florida Keys and I must say, The Point is the most beautiful place for a wedding ceremony.   Looking straight out to the east the view from the point is open ocean, If you look North, your view is of the ocean and a beach lined cove that looks very inviting.  If you turn your view to the South, the stunning view is of blue ocean and some very picturesque mangrove trees that grow out of the Atlantic Ocean forming unique shapes.  All of the wedding ceremonies I have shot at The Ocean Reef Club have been at sunset.  Having a sunset wedding ceremony on The Point means everyone gets treated to an incredible sunset.

For Taylor and her family, getting married at The Point had a special meaning.  When her grandfather passed away, his ashes were scattered off  The Point.  Taylor mentioned to me, during the wedding ceremony she felt her grandfather watching over.  As a wedding photographer who has photographed ceremonies all over the Florida Keys, I must say Robert and Taylor’s ceremony was one of the most beautiful.

In addition to providing their wedding guests with rubber wedding bracelets, Taylor and Robert planned several get-togethers to help their wedding guest mingle.  These events were spread out over several days.  These included taking some guest out to dinner at some of the Florida Keys, on the water restaurants.  Taylor’s family owns a boat named “Time to Burn” which is a reference to her fathers family business of making firefighter turnout gear. Both Lauren and Taylor work with their father in the business.   Aside from taking their boat out and touring the Key Largo area, Taylor and Robert kept their wedding guests busy with a wide range of other pre-wedding activities and events. Because there is so much to do at the Ocean Reef Club the resorts tag line is , “A unique way of life.”

I asked Taylor if she would like to share some advice to brides planning their weddings.  Taylor quoted  Desmond Tutu  who once wisely said that “there is only one way to eat an elephant: a bite at a time.” What he means by this, is that when something in life that seems daunting or overwhelming, and even impossible anyone can stay positive and focused by gradually taking on each task one little bit at a time.

The ceremony at “The Point” was beautiful, just look at these pictures!    There is a specific time of the day that photographers refer to as “The golden hour.”  It’s the last hour before the setting sun hits to horizon.  This is the time when the light from the sun is at its best. At this time, the lighting is soft, there is a sunset to photograph, and angle is perfect for taking bride and groom pictures.  As it turned out the ceremony ended just as the golden hour began.

About the photography, Taylor and Robert’s wedding planner,“Andi Dyal” created a wedding timeline that gave a generous amount of time for all the posed pictures as well as bride and groom pictures.  This was very helpful because the Ocean Reef Club is such a large property with a wide range of picturesque locations.  In addition, plenty of time was included to take the getting ready pictures.  Read my article on wedding timelines.   A large shuttle was provided to bring the bride and groom along with our wedding photography and video crew to several different locations.  Robert met us at a pre-arranged location for the first look.  Once Taylor and Robert saw each other, we spent some time taking more pictures.  Taylor was feeling a bit overwhelmed before the first look but once she saw Robert the overwhelm went away and she was ready to proceed. At a set time, we met up with Taylor and Robert’s families and the wedding party for the posed pictures.  After we finished the posed pictures it was time to get ready for this ceremony. 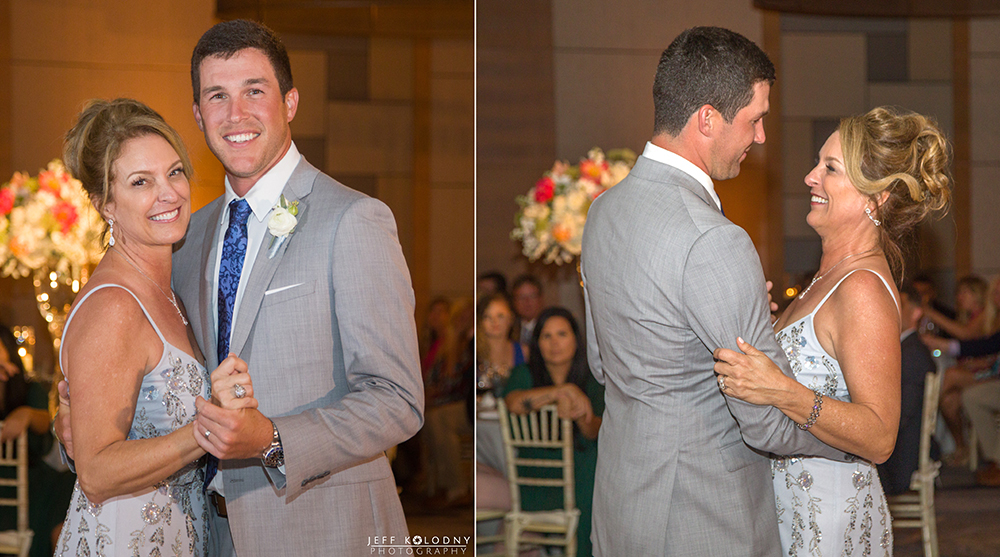 The ballroom was decorated with beautiful topiaries and awesome lighting.  As expected the party raged on and on and on.  I had a blast photographing this awesome Ocean Reef Club wedding!

(Photo & Video) from “The Falls Club” A beautiful Lake Worth wedding venue.