When Anna, (Jessica’s mom) told me her daughter wanted Vizcaya maternity pictures I was so excited.

If you are not familiar with Vizcaya Museum and Gardens,  let me introduce you to one of the most beautiful places in South Florida.  I photographed these Vizcaya maternity pictures for Jessica and Michael at Miami’s most beautiful locations.  If you are planning a Wedding, Bat Mitzvah, Elopement, or need Engagement pictures, Family Portraits or in this case, Maternity pictures, having them taken at Vizcaya is a no brainer.  Located close to North Coconut Grove in Miami, a visit to Vizcaya will feel like a trip to a land far far away from the hustle and bustle of Miami and the surround areas.  For this South Florida photographer, a photo session here means beautiful picturesque views of Biscayne Bay, rock arches, walking paths adorned with exotic landscapes and historic buildings that all combine to become a photographers playground.

ABOVE: These two pictures were taken at Vizcaya’s Secret Garden.  Tucked away in a special location, this area is unique because of it’s coral rock formations that are perfect for taking interesting pictures.  The coral walls form an enclosed courtyard which makes for a private area.  The inspiration for this private location comes from old Italy and is one of the most visited parts of Vizcaya.  The stone arches and pathways that lead from the Secret Garden to the main gardens create a sense of mystery which draws visitors to this hidden location.   Click here and look for the red number 1 to see where these Vizcaya maternity pictures were taken.

ABOVE RIGHT: – There are so many awesome photo spots at Vizcaya, the picture above was take at one of my favorites.  At both sides of the main garden include walkways.  At the end of both walkways are small gazebos made of stone and covered with greenery.  This is just another of many beautiful photo spots.  As a South Florida photographer, I find that there are unlimited ways to photograph this area.  Here is a wedding picture taken at this location. Vizcaya at night.   If you would like to know where on a Map of Vizcaya where this location is, click here and check out location number 2.   Bride and Groom share a romantic moment in a hidden Vizcaya location.  Vizcaya closes to the public at 5:00PM which is a bummer for anyone who is visiting for a daytime photo session.  At night Vizcaya takes on a completely different look and feel.  If you are planning a wedding at Vizcaya there is no question that you will fall in love during your daytime site visit.  However, if you have the luxury of being a guest at a night wedding,  you will find that once the sun sets Vizcaya becomes a fantastic picture perfect location.

BELOW:  Both pictures below were taken on the north side of the main house. Jessica standing alone shows Vizcaya’s David A. Klein Orchidarium in the background.  This location is another great photo spot that often gets missed by visitors who do not walk around behind the main house.  Because this part of the property is surrounded by the Main house and tall trees the lighting here is always soft and even.  One of the highlights of Vizcaya is the abundance of blooming orchids.  Vizcaya actually has a orchid program which was started by David A. Klein.  The picture on the left was taken at the stair case that leads to the second floor East terrace.    Both of these pictures were taken at the red number 3 on the Vizcaya map click here.

Styling and floral arrangements for these Vizcaya Maternity pictures was provided by the fabulous Anna Hess.

If you have never heard of Anna Hess, take note.  Anna is not only Jessica’s mom, she is also one of South Florida’s best wedding and event planners.  As a certified wedding planner, Anna is not just skilled at planning, she is also a talented event designer.  Every event I have photographed for Anna looked amazing.  I’m always in awe whenever I see one of Anna’s latest creations.  Check out this picture of a  surprised bride when she sees a flow of flowers spilling out of her vintage Thunderbird.  Just one example of Anna, thinking outside the box.    If you love flowers, maybe you would like to tie the knot under an arch covered with beautiful colorful flowers.  Click here to see another breathtaking design by Anna.   When Anna plans a wedding or event she starts by learning all about her couple or client.  Once she understands their dream vision, her design team works to create the luxury wedding or event her clients imagined.  However, Anna doesn’t simply create visual magic.  She also manages all the other aspects of their event.  This includes, budget planning, creating realistic event timelines, and the all important to-do list.  The flowers in these photos were another creation by Anna.  She also provided the styling for these Vizcaya maternity pictures as well.   You can visit Anna’s website here:  Anna Hess Events 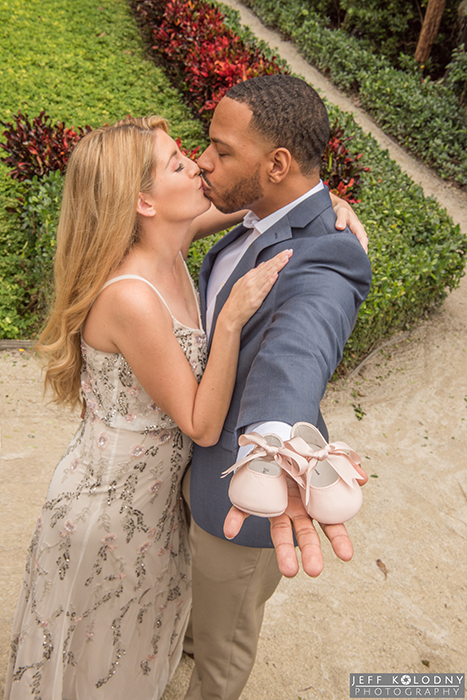 One thing to remember when planning a Vizcaya maternity photo session is to leave plenty of time.  Seriously this place is massive,  with so many awesome places for photography you will need at least two hours to cover everything.  I would actually say three hours is even better.  The gardens close at 5:00PM and when they say they close at 5:00PM they mean everyone should be out at 5:00PM.  So start early and enjoy the grounds at your leisure.   There is a huge amount to explore at Vizcaya.

Our Maternity photo session lasted about three hours.  In that time we walked into the main entrance, around the north end of the main house.  We spent about 20 minutes taking pictures at the garden and stairs before walking up the stairs to the east terrace.   From the east terrace we ventured to the Secret Garden.  At the Secret Garden we spend another thirty minutes taking pictures.  Then Jessica and Anna stopped to change outfits.  During this change I took Michaels picture, (check out Michael on the lower right) at position number 5 on the map, click here and look for the red 5 to see Michaels photo spot.

As we made our way down the path to the south side of Vizcaya,  Jessica turned to me and asked to have a picture of herself with this statue.  These types of statues are located all over Vizcaya.  When Vizcaya was first build in 1916 a number of very prominent sculptors were hired to create some of the statues that are visible around the property.  One such artist was Alexander Stirling Calder who’s statues were incorporated into Vizcaya’s Barge.  To see where this picture of Jessica was taken click the map of Vizcaya and look for the red number 4

The main garden is one of the widest open spots at Vizcaya.  It’s the perfect place for walking shots and other fun images.  During the day the sun usually hits this location and creates a variety of different lighting effects.  On this day it was somewhat cloudy which allow for soft even lighting in all directions.  To see where this photo was taken click here and look for the red number 6

At the far south end of the property there is an open grassy area, this location was perfect for a casual picnic.  While Anna was setting up this enticing and romantic looking scene, I took pictures of Jessica and Michael at another location.  Incase you are wondering where this picture was snapped check out the red number 7 on the map, here.

Most of the wedding ceremonies I have shot at Vizcaya have taken place at the Garden Mound.  Check out the red number 8 on the map here.   The Garden Mound is another one of my favorite places at Vizcaya.  It’s beautiful when looking in all directions.  These pictures were taken looking toward the south.  If you turn to the north you get a view of Vizcaya showing the gardens and the main house.  Honestly, just this one spot on top of the hill is perfect for an entire photo session.  Here is another wedding picture which was taken inside the building in the background.

These pictures are a result of Anna and her ability to select the best people.

In addition to being a top notch event planner, Anna Hess is also a master at putting together a great team.  The flowers were purchased from Jett Flowers in Miami. If course Anna arranges the flowers and styled the picnic set up.   Jessica’s hair was done by Melissa Horn at Cloud 10 Beauty Salon in Delray Beach.  Jessica’s flawless makeup was done by Courtney Christopherson    If you would like to contact Anna she could be reached at (561) 573-8903

Given the fact that Vizcaya is such a popular and beautiful place, it only makes sense that I would work there often. During my years working as a South Florida photographer I have taken many of my favorite pictures at Vizcaya.  At the bottom of this post I’ll include some links to my favorite pictures.

All the pictures in this article were taken at Vizcaya Museum and Gardens in Miami.  Here are some links to additional pictures taken at this beautiful wedding, portrait, and event location.

Bride and her girls at Vizcaya. This picture was taken at one of my first weddings at Vizcaya.  It’s a fun picture of the bride and all her bridesmaids.  As a way of making this shot more interesting, I enhanced the picture so that only the flowers are in color.   In addition to the Secret Garden, Vizcaya has other more secret locations.  Inside the main house is this hidden Secret Staircase.    When photographing a wedding or event at Vizcaya, exploring inside the main house becomes another option.  While some parts of the main house are closed to the public there are still plenty of places to explore.  This double reflection image was taken in an area at the center of the main garden.   There is plenty of small ponds and small water falls around Vizcaya.  Our maternity photo session took place during the Covid pandemic and the building and grounds were under construction at the time.  However, even with the construction there were more then enough places too take pictures.   Here is another one of my favorite wedding pictures from Vizcaya.  This one was taken at the base of the Garden Mound.  The brides expression during the first look was priceless.   This picture if a recently engaged couple shows the main house in the background.  When it comes to engagement photo shoots, Vizcaya is one of the most popular places. Here is another engagement picture taken at Vizcaya.  Last, I have photographed a large number of very elaborate weddings at Vizcaya, so many in fact that I can’t account for all the weddings in just one blog post.  However, this post would not be complete if I didn’t share just one more wedding post.  This wedding was supposed to take place at The Ocean Reef Club.  However, due to hurricane Irma it was moved to Vizcaya.  Check it out here: Lauren and Aaron’s Vizcaya wedding