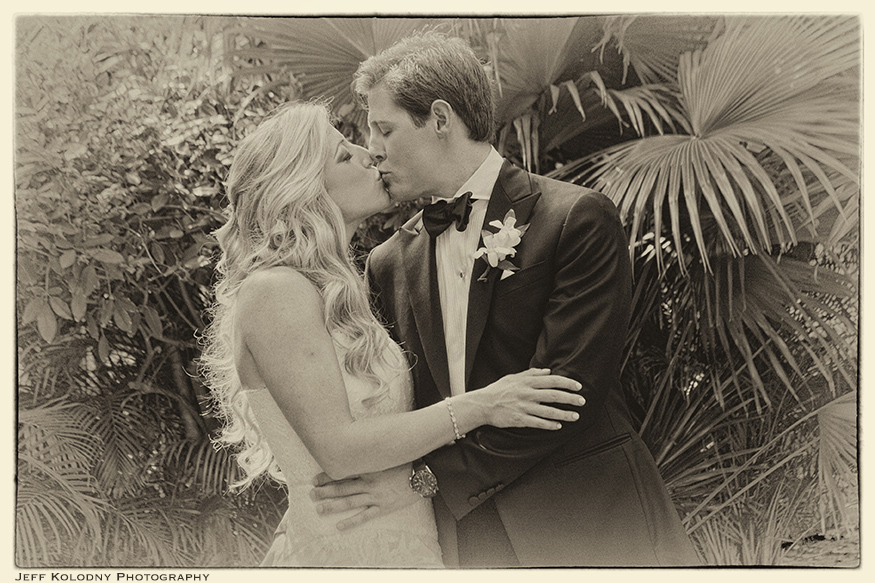 This couple first met at a concert in New York City, but nothing transpired from that first meeting. Then, six months later they randomly ran into each other at a bar and learned that they were living within two blocks of each other. They became engaged two years later on the 17th hole at Fenway Golf Club in Westchester, New York.

Albert positioned himself to get the faces at the start of the ceremony. Liz positioned herself the get the beautiful back of the dress shot above.

As for their wedding details, Alissa and Mark had an elegant traditional Jewish wedding that included a ketubah that was custom designed by a designer in New York. The designs were from their first vacation together, where they got engaged and their initials. Alissa’s unique gown was custom designed by Jennifer Dule of JR Dule Couture in Manhattan and her jewelry was by Penny Preville. Mark wore a supremely classy ensemble consisting of a Paul Stuart Phineas Cole tuxedo and velvet evening slippers. He also wore green Corgi socks. Mark’s black onyx and mother of pearl Paul Stuart cufflink and stud set were given to him by Alissa as a wedding gift.

Many other vendors contributed to the success of this unforgettable South Florida wedding. The music for the evening was provided by Tropics Entertainment’s band, Higher Ground – they did a great job at keeping the dance floor busy all night! The breathtaking floral arrangements were created by David Dalsimer of Dalsimer-Atlas. Hair and make-up services were provided by Salon 770. Rabbi Mark H. Kula officiated. Last but certainly not least, Crystal Prante of the Four Seasons Palm Beach oversaw the event for the hotel.

Many thanks to Alissa and Mark and their families for having us capture their special Palm Beach destination wedding in pictures and video!

Michael Rogers: Your photographs are absolutely gorgeous. Working with you was extremely pleasant. Thank you for a job, well done! (Jul 12, 14, 01:51pm)

Alissa : These pictures are amazing! A huge thank you to Albert and Liz for everything, you guys were great!

What to ask your South Florida Event Photographer.

A Sunrise Marriage Proposal at the Ocean Reef Club